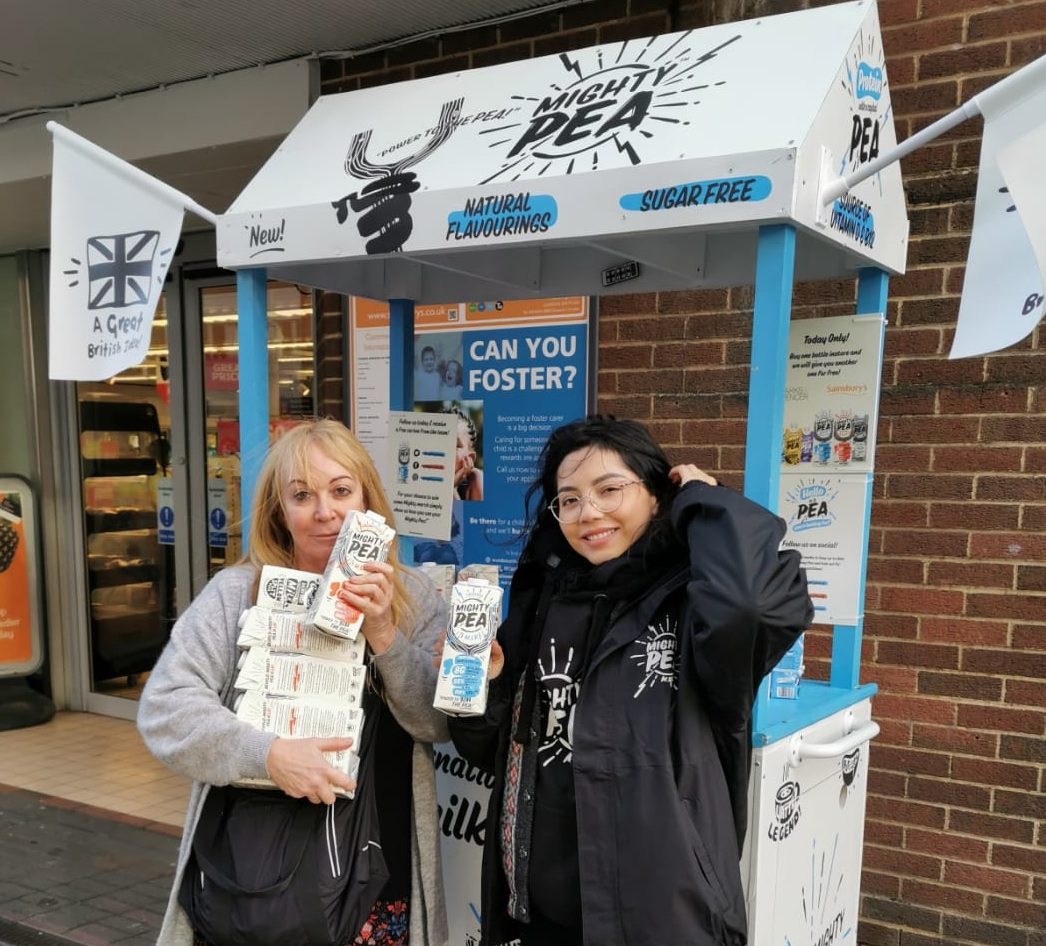 As we look to a healthier New Year in 2021, here are six inspirational veggie victories of sampling campaigns from Veganuary 2020, that all delivered satisfyingly meaty retail results!

Bells & Whistles make a truly sumptuous range of cakes which are rich, moist and exploding with flavour, using innovative, dairy free and gluten free ingredients. You don’t have to be vegan to appreciate delicious cake!

Hidden away on the specialist vegan or gluten free aisle, most mainstream consumers don’t see them. If you’re not a vegan or celiac shopper and hadn’t tried them, you might think that a vegan, gluten free brand would not deliver on taste, over an alternative brand which isn’t restricted by dietary ingredients.

To overcome the discreet position and negative perception of what a vegan cake might taste like, a portable sampling cart was created to engage all shoppers on arrival to store. Taste sampling to mainstream consumers was incredibly positive, but to vegan shoppers with limited choices, it was a revelation!

Needless to say, sales were consistently very strong, reaching up to 140 units per store per day, on its tour of Sainsburys and Morrisons across Greater London and major cities of the UK.

A relative newcomer to the UK vegan aisle, Meatless Farm’s range of plant-based mince, sausages and burgers offer a like for like taste comparison with traditional meat options. Their goal was to encourage mainstream shoppers to eat more plant-based meals and substitute Meatless Farm options into shoppers’ regular meat based meals.

Most carnivorous consumers are suspicious of the drastically different taste experience of lesser plant-based substitutes, so don’t purchase or even consider it. Parents making healthier choices for their families think they’ll get push back, despite their best intentions.

Portable hot sampling carts fitted with flameless hobs were created and branded using ethically sourced materials, in line with the Meatless brand values. These were positioned in the foyers of Morrisons superstores, to cook up tasters of Chilli “Non” Carne, for all shoppers to see, try and be encouraged buy on arrival to store.

Shoppers were consistently amazed by the realistic taste. Record sales results were achieved for the brand, selling upwards of 135 units in a single store, in just one day.

The UK shoppers are unfamiliar with who to cook with broths, seaweed and specialist sauces, so without guidance and understanding, many shoppers select more familiar produce.

Create a visual cookery demonstration based sampling experience, showing shoppers who to blend their hot broth soup bases with ramen noodles, sushi nori seaweed, veg, sauce and seasonings – on a tour across Tesco Extras and a larger scale event day to engage the buyers at Tesco head office.

Over a thousand shoppers were educated on the cooking methods each day, with new brand fans made amongst all types of shoppers. Huge sales uplifts created at each store, reaching over 140 units sold in a single store, in just one event day – with over 1,000 full portion hot lunches serves at Tesco HQ.

Find out about Safe Sampling

It’s easy to forget that Veganuary isn’t the only consumer focus in January! Chinese New Year is an important seasonal opportunity for Lee Kum Kee who have been making authentic Chinese cooking sauces for over 100 years.

Despite the brand’s range of high quality, easy to use sauces, many UK consumers don’t feel confident of replicating the same taste experience that they buy from Chinese restaurants.

The sampling of sauces was brought to life with an oriental themed street side hot food catering cart, to cooking up delicious batches of Lee Kum Kee dishes alongside Chinese veg with noodles, with partnership brand Tofoo.

Impulse sales were encouraged with offering rewards such as chopsticks topped with the cutest Chinese Pandas or colourfully branded aprons. Hugely successful activity introducing mainstream consumers to specialist brand, selling upwards of 146 units in a single store in a single event day!

Soylent is an innovative meal replacement drink brand from the USA which combines soy, lentils and blends them with all the vitamins, nutrients and popular milkshake flavours, to attract busy professionals who might otherwise not have time to fit in their important morning meal.

Sold in food to go stockists like WHSmith Travel, there is both wide ranging meal choice competition and also a suspicion on how effective a bottle of Soylent is at acting as a genuine replacement for a full breakfast meal.

As the meal replacement experience requires a whole bottle to work its magic, then short dated stock was allocated to enable tens of thousands of busy commuters to receive a whole bottle, using street sampling outside of stations with WHSmith Travel stockists.

Print material with retailer vouchers explained the brand proposition to on the go sample recipients with the coupon aiding retention and converting purchases. The activity helped to both secure and grow their main retailer foothold in the UK.

When a new product innovation is as drastic as milk made from peas, both mainstream and vegan consumers just don’t know what to expect; which often leads to more familiar choices being made on aisle.

Offer chilled taster sip samples poured directly from the stylishly branded cartons, to show consumers what to look for on aisle and let them experience the tasty M.lk alternatives for themselves – and a larger scale exhibition area at Sainsburys HQ to present the stocked range and their latest NPD.

Thousands of new brand fans made, amongst vegan, allergy specific and mainstream consumers – with on the day sales upwards of 100 units per store. Over a thousand who samples presented at Sainsburys HQ, with the NPD Barista Blend achieving new position on JS store shelves too.